(born 3 August 1963)
is a Canadian professional contractor. He is the host of the television show Holmes on Homes, where he rescues homeowners from renovations gone wrong; and its successor TV series, Holmes Inspection. He is also a judge on HGTV’s show Handyman Superstar Challenge; and its American counterpart All American Handyman with Scott McGillivray.

Mike Holmes learned his craft from his father, who started teaching him construction work when he was 6 years old. By the time he was 19, Holmes had started his first contracting company, with a crew of 13 employees. At 21, Holmes founded his own renovation company. He has run two companies during his 20-year contracting career. He has three children: Amanda, Sherry, and Mike Jr., who have all appeared and worked on his shows.

In 2006, Holmes started The Holmes Foundation after seeing a renovation that was so poorly done that he felt it was necessary for him to tear the house down and start again rather than try to repair the damage.[1] The purpose of The Holmes Foundation is to encourage young people to enter the building trades as well as to assist those who have been impoverished by bad renovations. Mike is well known for his contribution to the international community through his work with SOS Children’s Villages.

In 2006 Mike Holmes was recognized in Canada’s House of Commons for his promotion of skilled trades and for his advocacy for improved building standards. He was acknowledged as an “extraordinary craftsperson” and “an accomplished master builder with a social conscience”.

Holmes is the author of two successful books: the national bestseller Home Renovation with Canada’s Most Trusted Contractor and Holmes Inspection — Everything you Need to Know Before You Buy or Sell Your Home, as well as a weekly newspaper column carried in the public.

In May 2010, Reader’s Digest’s second annual survey named Mike Holmes as the second most widely trusted person in Canada behind David Suzuki

Here is the interesting interview with him by Robert Koci; 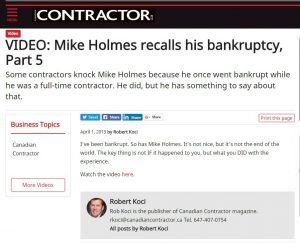 I can promise you that your interaction with me will not be that of a bottom-line, sales-focused person, but rather a solution-oriented floor technician.

Our Sales, Installations and Repairs are done in-house; we do NOT hire any sub-contractors. There is also NO SALESMAN COMMISSION paid here! FINANCING AVAILABLE! Starting as low as $1000 and up to 60 months for payment.†

← DMX FX™ / Delta FL Flooring Underlayment OR Dricore Subfloor Systems A big knock on Mike Holmes is that he doesn't have a certification in any trade. →